My latest work from the studio will be exhibited in a solo exhibition called "Femme Noir" at Catherine Asquith Gallery, Melbourne.  The show opens on the 16th October and closes November 3 2012.

Its has been a very hard yard this year to achieve this exhibition, from the moment I began to use local models on site in bars and nightclubs around Adelaide meant that my time from idea to completion of a painting has expanded about 10 fold. So I only have a handful of paintings to show for my hours that I've neglected my friends and family for all these months but I do feel like I have achieved something with the path of painting before me, lots to explore and an infinite number of models and situations to paint.
Posted by This Painting Life at 4:36 PM 6 comments:

There will be 9 paintings in the exhibition where you can see some of my latest work where colour features in my work again and I have painted family friends and local pin-up girl models in various settings in home city.
Posted by This Painting Life at 3:15 PM 3 comments: 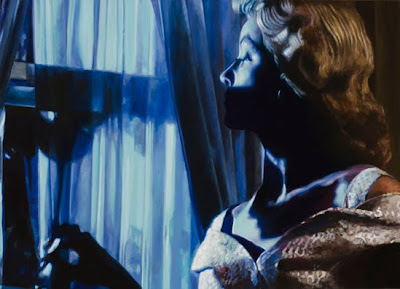 This painting will be shown in my exhibition "The Dissociated" in August 2012 at Beaver Galleries, Canberra.

My most recent work continues on from my exploration of the genre of Film Noir, primarily as the vehicle to express my thoughts and observations of human interactions.

Pristine interiors, marbled walls with patterned floors, as the shadows play with the psychological presence of people inhabiting the scenes. The imagined reality of the viewer is sometimes taken to the dark side, however as a frozen image we are left lingering for more clues.

In the moonlight, or dazzled by the city nightlights, what the night will bring, contemplation of the hour of culmination as thoughts of one’s life’s endeavour pass. Here the world appears different, small things become magnified as the droning sound of daily existence fades and the sounds of the night take over.
Posted by This Painting Life at 10:58 AM 4 comments: 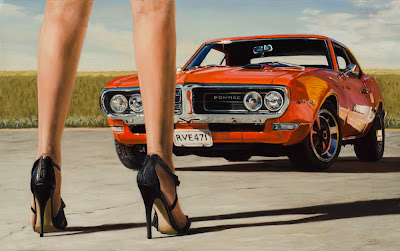 My love of cars (and shoes) is portrayed in my latest painting which is to be exhibited in California at Elliott Fouts Gallery Sacramento, CA in the invitational exhibition "Planes, Trains & Automobiles" which opens March 3 and closes April 5 2012.
Posted by This Painting Life at 4:56 PM 3 comments: 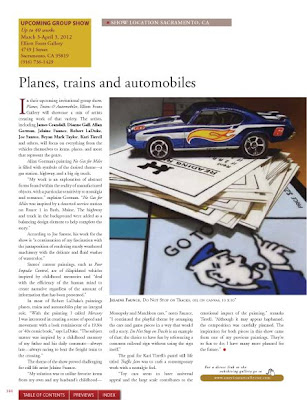 Well 2012 is going to be a big year for me...
2 Solo exhibitions...group shows, commissions and a portrait of my great uncle!

My first exhibition of the year is an invitational group show called "Planes, Trains & Automobiles" which opens on March 3 2012 at Elliott Fouts Gallery Sacramento, CA I have a small work in this show, the image has been a lot of fun producing, using the neighbours beautiful Pontiac Firebird and his wife's legs!

My solo exhibitions begin at Beaver Galleries, Canberra opening Aug 16th, followed by Catherine Asquith Gallery, Melbourne opening October 16th. In conjunction with the Melbourne show, I will be producing a large catalogue with an accompanying essay by Professor Ted Snell.

I will keep my readers updated as the work progesses this year...its going to be a VERY BIG year as I said!
Posted by This Painting Life at 12:30 PM No comments: