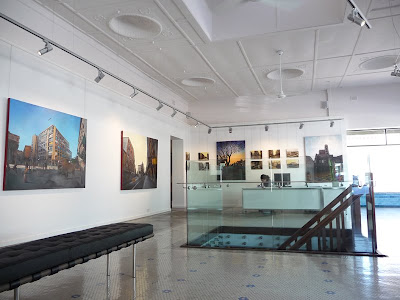 A bit of excitement in Adelaide this week as the doors on a new exhibiting space opened. Gallery 139 has been set up to show emerging contemporary artists by art dealer, Tony Bond. After several years running his contemporary Aboriginal Artworks Gallery, Bond has expanded and opened a fabulous and diverse space that will give many of the states younger artists an opportunity to show paintings, sculpture, video and installations in a beautiful old character laden building. The inaugural exhibiting artist is Thom Buchanan whose works you can see in the installation photo as above. There are also stock works in the downstairs galleries and it was great to see many sales throughout the gallery, I hope the enterprise continues to be successful and becomes a mainstay of the Adelaide Art Scene for many years to come.
Posted by This Painting Life at 12:28 AM No comments:

My new and fabulous compact camera! 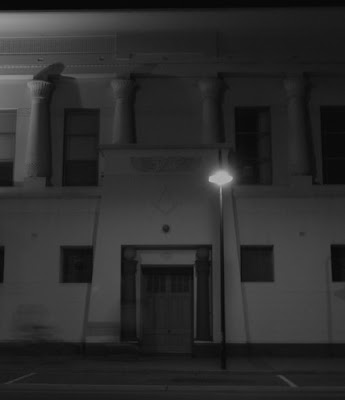 My old digital camera started flashing magenta and violet at me intermittently and was taking forever to take a shot so a bit the bullet and went out and purchased a new camera yesterday... its a Panasonic 9.1-megapixel 10x Zoom DMC-TZ15 Lumix compact camera, I still have the studio Digital SLR but need a camera to carry with me all times and this one is perfect. I went out last night to try some moody black and white shots and was pleased with the results. I'm just having a ball with my new piece of equipment.
Posted by This Painting Life at 1:02 PM No comments: 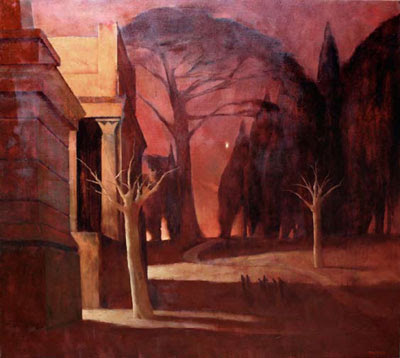 It was a delight to go to the opening of Rick Amor's Adelaide show a few days ago, although containing only a few works, each provided a thought provoking reminder of the artists unique view of the world. He made the trip over for the opening, so it was great to see him again and to talk about the mutual love of painting. He was accompanied by his long time supporter and dealer, Bill Nuttall, director of Niagara Galleries, Melbourne (or Uncle Bill as I like to call him!) I was lucky enough to get a personalised signed copy of the Gavin Fry tome that has just been published on Rick's work and was doubly pleased to see that the work I own of Ricks is reproduced in the book as well. The painting has been in my collection since the mid 90's and it is one of my most treasured possessions, I'll never sell it, I look at it every day and its a part of my life. Last Sunday was another treat with ABC Sunday Arts story on Rick which was a preview to his current survey exhibition "A Single Mind" being held at Heide.

While I'm mentoning books, be sure to check out the latesst book on painter Jeffrey Smart by Christopher Allen, which looks at his "Unpublished Paintings, 1940-2007"....Its been launched by Australian Galleries this week and coincides with an exhibition of his paintings at Philip Bacon. I've also heard that the ABC program, Talking Heads are looking at a profile on Jeffrey, so watch out for that in the TV promos.
Posted by This Painting Life at 11:47 PM 2 comments: