Have been working on this portrait of my Great Uncle Dr Donald Beard for quite awhile now in between my other commitments.  Have decided say it is finished eventhough I could keep working on it...it is always difficult to know when to stop...but stop I have. The image will be in the forthcoming publication from Wakefield Press called the 'The Diggers Doctor' due to be released April 2014. At this stage there will be a launch of the book by General Peter Cosgrove at SA Government House, which is all very exciting!
Posted by This Painting Life at 3:21 PM No comments: 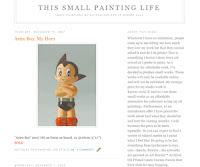